The "Lodhi-era toilet" coming up at Defence Colony Market is much nearer completion now, and while we've been spared a Lodhi tomb replica, this is now turning out to be some kind of "modern design smashing through a representation of Delhi's past" kind of thing. So it seems a bullet has been dodged (no Lodhi-era toilet!), but this throws up a whole new set of intriguing ideas! 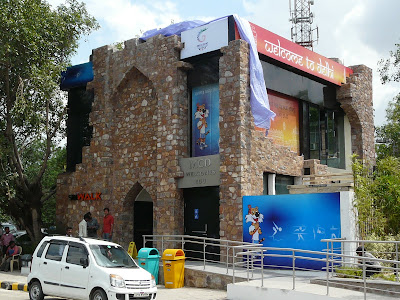 The design concept for this structure seems to have been that a that modern, world-class (since that is such a catchphrase these days) Delhi, represented by the glass, steel and aluminum facade, is breaking through the old, staid stone edifice of a Delhi of the past. The technological advancement of today is (finally!) breaking through simple, low-tech yesterday. Worldliness is breaking through unrefined indigenousness.

However, to me, the stone edifice represents not just the Delhi of earlier centuries, but could also refer to the Delhi of earlier "government-sanctioned" modernism from the 1960s-80s, which used a lot of stonework of this kind. In this way, it represents the gleaming facade of today's "public private partnership" (PPP) model breaking through the older facade of complete government project-control. Nehruvian modernism, which itself tried to break free of the past, is now pushed into and lumped with that past, with all it's connotations of "failure" and the need to break free from it.

Of course this is reading a lot into a public toilet (with a cafe above it), and it might just be a much more jocular and playful interplay of old and new to attract tourists, but if there is at all an intention to represent a break, then I'm pretty sure it's not just a break from the far away and thus benign era of Delhi as necropolis, but also a reference, even if just associatively, to a much more recent past as well.

I also have to add that for some reason, these toilets are nearly as well guarded as Rashtrapati Bhawan is - there are guards posted on all sides of the structure, and even a few thugs lounging about with the guards. It took all my photographing wiles to take these photos! Maybe it's just the contractor's men, maybe this is the usual modus operandi for commonwealth games construction and this one is just much more noticeable because it's out in the public, or maybe the builders are so pleased with their design that they don't want anyone copying it!

Whatever the answers are to all these issues, from the beginning, this take on public toilets has just been a weird and fascinating exercise! We also need a new name for these toilets, since "Lodhi-era toilet" is no longer applicable. "New Indian neoliberal public toilets", perhaps? :)
Posted by varun shiv kapur on Tuesday, July 27, 2010 No comments:

Okay, so when I mentioned a few posts back about dearly lacking "coordinated innovation" among the various government agencies that look after Delhi's urban landscape, this is not the solution I had in mind! Public toilets that look like Lodhi-era tombs from the 15th and 16th centuries? Really? 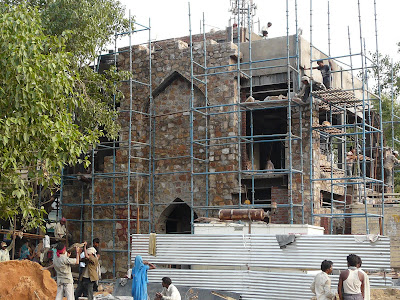 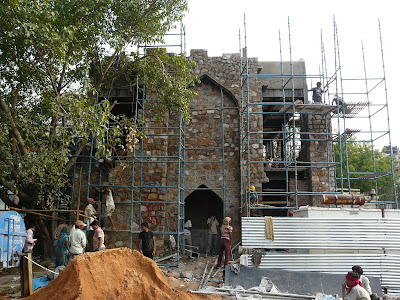 These new "world-class toilets" (that's the term that was repeatedly said to me by people at and around these construction sites when they were at a nascent stage) look like they're the crazy brainchild of some MCD and ASI officials who had had a few pegs of Solan No.1 too many sitting together one evening (I'm not claiming that this actually happened)!

While the finished product of this example at Defence Colony Market is yet to be seen, I really don't know what they were thinking. Why make a public toilet look like some of Delhi's most visible historic landmarks?

If anyone is wondering why these toilets are on two floors, the ground floor houses the toilets themselves, and the floor above (with a mezzanine as well, I think) will be a cafe or restaurant. Go figure!

To be fair though, others I've talked to don't think this is a bad idea, and actually like this structure as it comes up. Others still think it will encourage pissing in the actual tombs strewn about Delhi. I guess we'll have to wait a bit more to see how all this shapes up ...
Posted by varun shiv kapur on Tuesday, July 13, 2010 No comments: