I went down to the Barapullah Nala (drain) to photograph the progress of the elevated road, and found the nala in spate because of today's heavy rains. Here are a few photos.

The first photo is of the nala at the railway line near Nizamuddin Railway Station. There is no gap between the water and the railway bridge's girders, and all kinds of flotsam is accumulating at the girder. The water level has reached the settlement at the right of the image. Construction work on the elevated road to the left is continuing despite the spate.

Barapullah Nala at the railway line near Nizamuddin Railway Station. Click on image to enlarge

These next images are from the elevated road construction site at Mathura Road. Construction-related vehicles that were in the nala have at least half their wheels submerged!

A truck, earth-mover and large crane inside the swollen nala. Next to the truck is a large pre-cast segment of the road. I don't think there is any danger of any of these washing away, though! 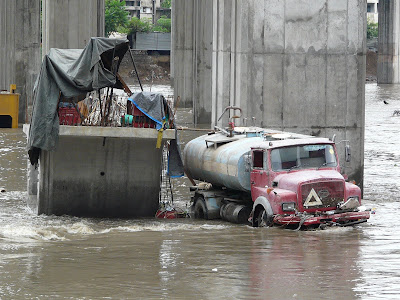 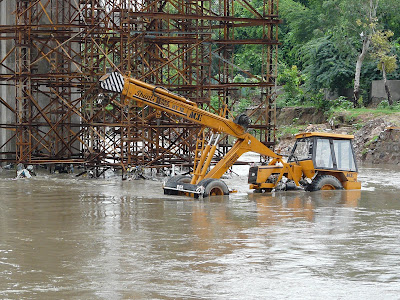 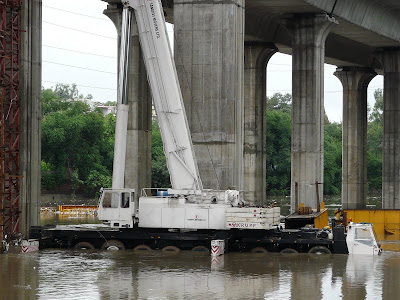 Here are images of the elevated road construction, which I'd gone to photograph.

And at Mathura Road

One of the side advantages of Delhi Metro is that it's elevated sections skim over Delhi's low roof-line (at least for now), providing long views of rooftops and the surrounding city fabric.

On one such journey on the Red Line, I spotted an old gumbad (domed building) sticking out from surrounding newer houses near the Pratap Nagar station. I got off to explore the gumbad, and of course at ground level it was much harder to spot in the maze of surrounding residential streets. After some nosing and asking around, which included a classic exchange between me and a street vendor, that went something like this (in Hindi of course):

I turned around, and of course the gumbad was encroached on all sides, and people had put up property walls all around the structure, but luckily on three sides you could at least see the original walls of the structure. I asked people at a goods godown (which was one of the surrounding encroaches) if I could take a couple of shots of the place. They allowed me to, but unfortunately the photos I took were overexposed. Here is the best of the lot - you can see the top of the dome of the (probably) late Mughal structure peeping out from behind the tin roofs and foliage. 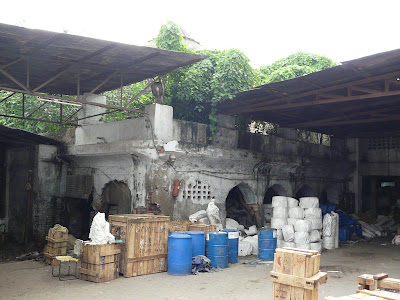 Posted by varun shiv kapur on Thursday, August 19, 2010 No comments: