Jumping the Gun on Delhi's Light Rail and Monorail Plans

Following up on the Delhi Metro Phase 3 map I made a while ago (and also various metro maps using Google Maps), I've made another map - also on Google Maps - that incorporates planned Light Rail and Monorail projects as well. Click on the image below to go to the map. 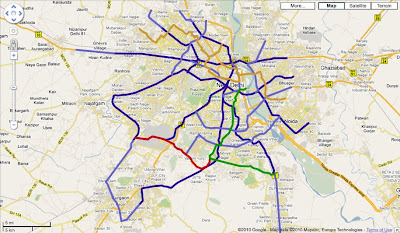 The impetus for this map was the Delhi Chief Minister's recent declaration that monorail plans (and presumably light rail plans though the news reports did not mention her talking about light rail) have not been canceled but rather postponed till after the Commonwealth Games. I remembered seeing maps of proposed Light Rail and Monorail routes on the DIMTS (Delhi Integrated Multi-modal Transit System) website, and used those to make the map above.

If anything, these light rail/monorail routes are even more speculative than the metro phase 3 maps in this and previous maps, but this map is a possible representation of what Delhi's multi-modal urban rail system might look like by 2015.

A couple of observations regarding Delhi's infrastructure projects in general and the proposed rail routes/systems:

By this point, it looks like the October 2010 Commonwealth Games are holding up as many infrastructure projects as they are instigating. I believe a while ago the CM said that major road-improvement projects have been shelved till after the games, and now these urban rail projects have as well, and I'm sure a whole set of other projects must have been shelved too. I guess it's really good that the games have provided the impetus for the projects that have been built and are under construction, but I'm now waiting for those projects to become up-and-running, as well as for the games to be over and done with, so we can concentrate on these further infrastructural projects. Hopefully the momentum of construction and development will not slow down after the games, because the city really needs a lot of work!

My other observation is about monorail vs light rail vs BRT (bus rapid transit) as the "light transit" supplement to metro. I'm becoming more and more skeptical about BRT, because there are so many vehicles on the roads in Delhi, and traffic is so undisciplined, that the roads really cannot support a rapid bus system, and people cannot realistically be expected to change their driving behavior anytime soon. Delhi needs three lanes for traffic, and for sure the roads need to be improved, standardized and the private bus system overhauled as is being done, but the BRT system just takes up too much space on already crowded roads.

What we need instead is a completely grade-separated light transit system that is totally removed from the road system, and can penetrate many parts of the city. To accomplish this, I think the only way to go is elevated. And for this reason, I think monorail might be an even better option than light rail. Monorail becomes advantageous over light rail only if the entire system is elevated, at which time it's smaller footprint both on the ground and visually in the air, as well as possibly greater maneuverability, make it appealing. So instead of a BRT system, another option is to concentrate on a monorail system criss-crossing the city. That will leave the roads free for improving the situation for public transport, private transport as well as for pedestrians.

Of course I'm not an expert on any kind of monorail vs light rail debate, but I feel that light rail (as well as BRT systems) work better when roads are emptier and space (for at-grade interchange etc) is more abundant than in Delhi. At the same time, Delhi roads are not as narrow as those of a city like London, making it possible to devise a good functional bus system that is not BRT. A widespread monorail system will free up the roads for improvement, whereas BRT will narrow the roads unnecessarily. These are just my views as of now, and they might change in light of more information, but this is MHO for now!
Posted by varun shiv kapur on Friday, March 05, 2010 2 comments: