Okay, so with all those caveats, here goes!

The DPR (Detailed Project Report) for Phase III construction of Delhi Metro is in the works, and a lot of articles are being written about what Phase III is going to look like, where all its going to reach, how long its going to be (in terms of length of tracks), whether they're going to start construction before or after Phase II is complete etc etc (Phase II is scheduled to be completely operational by Sept 2010 except, I believe, for one small bit).

In terms of the areas that metro is going to reach in Phase III, most reports are basing their stories on the routes indicated on this map (not on that particular map per se, but on the routes it indicates), which in turn are probably based on this map which is by the metro people but more complicated. 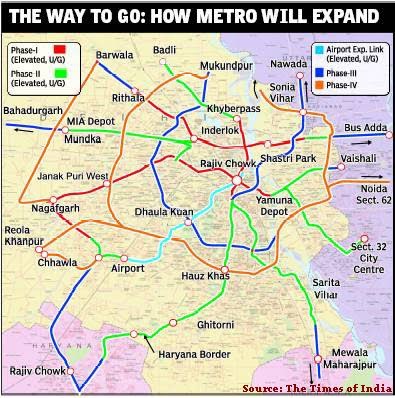 However, I've read one recent article that has a different take, which looked much more interesting to me in terms of the routes drawn out as well as the fact that the report is not based on a map generated many years ago when Phase III was purely speculative. However, the map accompanying the article has routes marked out in a very rough manner.

The "newer" though very rough map 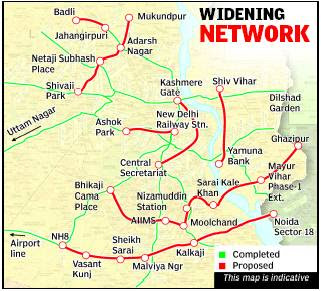 So I thought I'd make a more accurate map of the new possible routes mentioned in the article. However, since only a few of the stations along the proposed routes are given in the article, the map I've drawn contains a whole lot of speculation on my part. This means my map below is speculation over speculation, so it might bear no resemblance whatsoever with the actual Phase III routes when they are finally made public! That said, it was a lot of fun making the map, so I'm putting it up anyway!

Note: The black lines on my map are Phase I & II lines (with stations indicated by black boxes), which are either already functional or will be functional by the end of 2010. The blue lines are new Phase III routes. 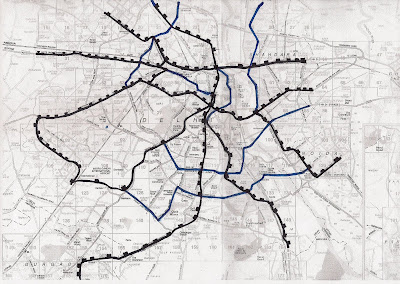 (Click here for a post about some google maps I made of Delhi Metro routes, including another version of the map above)

Note: The established (black) lines probably have a few errors, for instance I've shown the New Delhi Railway Station to Delhi Airport line as going through Rajiv Chowk, when in actuality there is a whole new station being built for it at Shivaji Stadium nearby.

Okay, now that I've put up that completely speculative map, let me freely analyze the completely speculative routes! Here goes. So if this plan is correct, it really shows to me that these metro guys are using their brains when coming up with their routes. Looking at the map, set aside for a minute the obvious routes needed along the inner and outer ring roads, and take the shorter routes being considered from Central Secretariat to Kashmiri Gate, and New Delhi Railway Station to Ashok Park.

I'm assuming that the Central Secretariat to Kashmiri Gate route will be a continuation of the Phase II "Violet" line from Badarpur Border to Central Secretariat. The current Yellow Line from Rajiv Chowk to Kashmiri Gate (both of which are interchange stations) is one of the most crowded spans of the metro, and this will give a second route through the area, in the process giving metro access to Delhi Gate, Daryaganj, Jami Masjid and Red Fort, and possibly also the Firoz Shah Kotla cricket ground (is the ITO junction too much to hope for?). This will also move some of the present congestion of Rajiv Chowk onto the comparatively empty Barakhamba Road station, and divert new traffic coming to Rajiv Chowk via the Yellow Line from Gurgaon to the Central Secretariat station. The Kashmiri Gate station will get more crowded though, and I'm not sure what the plan is for that!

The second line I mentioned above, between New Delhi Railway Station and Ashok Park will presumably be an extension of the Green Line, and will connect to the Serai Rohilla Railway Station (thus all four of Delhi's major railway stations will have metro links - the Nizamuddin station is also scheduled to have a metro station in Phase III), along with a station or two in the Pahar Ganj area and few on Rohtak Road.

When it comes to the ring road routes, the metro people haven't decided to just complete one ring first and then start the next, but are taking on bits of both rings simultaneously, so as to get them running where they are needed most, and making it easier to get future extension plans on these rings approved (hehe!). So south Delhi, which will have just two metro lines passing through it by 2010, will get connected by both ring road routes by 2015, and all four lines running through west Delhi will gain a connection between them.

Pretty clever! Too bad it's all completely speculative. Now to wait and see what metro is really planning to do for Phase III!
Posted by varun shiv kapur on Tuesday, November 10, 2009